ANDROMEDA is present at the FID2018 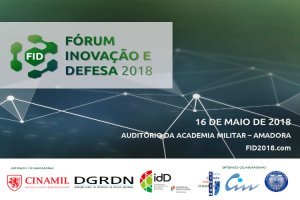 The Andromeda Project will be presented during the first edition of the Forum Innovation and Defence 2018 , which will take place on 16th May, at 9:00 in the auditorium of the Military Academy, in Amadora.

FID2018, organised by the Centre for Research, Development and Innovation of the Military Academy (CINAMIL), the Directorate-General for National Defense Resources (DGRDN), the National Defence Industries Platform (idD) and the National General Army, will count with several speaker panels, and will focus on Research, Development and Innovation (ID&I) in Defence.

This event aims to deepen the visibility of Defense R&D+i opportunities, sharing and showcasing R&D+i success stories, promoting cooperation between the Armed Forces Research Centres, the National Scientific and Technological System, and the Defence Technological and Industrial Base, by sharing the challenges of with potential partners.

The participation of Project Andrómeda in FID 2018 is a perfect opportunity to highlight its importance, as it will make available an innovative maritime surveillance system that ensures and improves operational interoperability between the Navy/Maritime Authority, the Air Force and other national agents. This gives the authorities the capacity to share an increased situational awareness in surveillance missions.