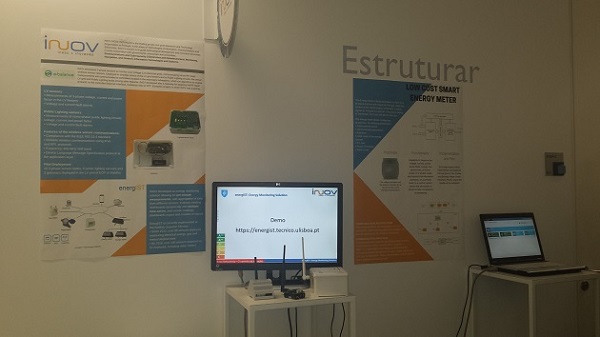 INOV was at the event “O caminho da Inovação” of Águas do Alentejo, on 14th November at Fábrica da Água de Alcântara, contributing to the debate of the future of innovation in the water supply sector.

INOV presented a low cost smart energy meter, which is developing in partnership with Águas de Portugal within the European project INETGRID. The smart meter will have the capability to measure the voltage, current, power, power factor, energy and service time, of mono-phasic or tri-phasic loads, and transmit that information wirelessly, on a periodic basis, to a central system, where that information is stored for later visualization or processing.

The research and development of technological solutions with application in energy efficiency has been focused by INOV both at European and national levels.

Within the scope of the European project e-balance, INOV developed tri-phase sensors to monitor Low Voltage (LV) electrical grids, communicating via an RF-mesh wireless sensor network. Deployed in strategic points of the LV grid feeders and in Public Lighting circuits, the sensor measurements are communicated to controllers located in the secondary substations, which run algorithms to localise faults, among other features. INOV developed also a Gateway for adapting the RF Mesh protocol to the controller Ethernet interface.

At the event, INOV also presented the energIST platform, an energy monitoring solution allowing for per-minute measurements, with aggregation of data from different sensors. energIST is implemented at the Instituto Superior Técnico since 2012, reaching currently up to 80 sensors deployed for measuring electrical and gas consumptions as well as meteorological data.